I personally have not seen the notorious kitten killing videos that were uploaded to You Tube during 2010-11 and, whilst I do have concerns around the actual dates they were purportedly made and with the credibility of some of the 'evidence', I believe the balance of probabilities is that Luka Magnotta was involved!

However, in some quarters on the internet there are people who vociferously affirm a belief that Luka Magnotta was framed as the perpetrator of the kitten killing videos. In fact, there are even some who actually claim to have "irrefutable evidence" to prove this conspiracy theory that the video and photographic evidence linking Luka Magnotta to these crimes was deliberately doctored to set him up.

If Luka Magnotta was indeed set-up by some shadowy group of conspirators out to get him, then could someone please provide an explanation to these simple widely-known facts?

FACT - On 8th December 2011 Luka Magnotta protested his innocence of any involvement in the kitten killing videos during a  face-to-face interview with Sun reporter Alex West at his lodgings in Wembley, London.

Alex West was dispatched to confront Luka Magnotta at the Fusilier Pub, Wembley, following several email tip-off's to the Sun about Luka Magnotta's whereabouts.  The Sun believes Luka Magnotta himself was the source of these emails about where he was staying.

Earlier that day Luka Magnotta had visited the London offices of the Sun Newspaper, after an article had been featured in the Sun linking Luka Magnotta to the notorious kitten-killing videos. Luka Magnotta denied involvement in animal cruelty and requested that the Sun stop "harassing" him. 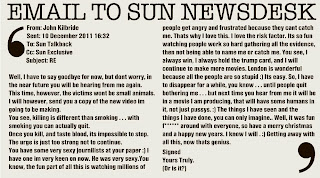 FACT - On 10th December 2011 the Sun Newsdesk received an email from a UK Yahoo account in the name of 'John Kilbride' (a twisted reference to a victim of the Moors Murderers) intimating at the meeting with Alex West on 8th December 2011 and glibly admitting involvement in the kitten killing videos.  There is also a chilling reference to making future videos involving humans.

The Sun believes this email was from Luka Magnotta and whilst I am not the greatest fan of The Sun or the Murdoch press I do not see any reason to question the integrity of the journalism in this instance.

12th December 2011 - Sun reporter Alex West contacts the Metropolitan Police and is referred to the Malicious Communications Unit at Islington Police Station, where he hands over the evidence of the email from 'John Kilbride' plus copies of the intelligence he has gathered on Luka Magnotta and his alleged animal cruelty.  The Met's MCU team investigate and ascertain the email was sent from a server in The Netherlands, which is outside the jurisdiction of the Metropolitan Police so no further action is taken.

So, WHO else besides Luka Magnotta could have had knowledge of the confrontation with Alex West just 48 hours earlier on 8th December in relation to the kitten killing videos, that was so obviously intimated at in the 'John Kilbride' email?

If my memory serves me correct, the metonymy referring to a scandalous situation as a 'something-GATE' goes back to the 'Watergate Scandal' that engulfed and ultimately forced from office former US President Richard Nixon, whom some historians ascribe metaphorically hung himself with his own rope.
Might I suggest to you that 'Kitten-Gate' (as I call it here) could simply be a case of an individual who arrogantly believed he could outwit everyone whilst publicly continuing to protest his innocence, yet at the same time left a huge length of rope dangling behind him, by which he ultimately hung himself!
If anyone knows differently, please do feel free to enlighten me?!


11th November 2014 - Dr. Allard, forensic psychiatrist giving expert testimony in Magnotta's Defence, stated to the Court that Luka Magnotta admitted to her that he: "admits to having sent the email to Alex West, journalist with The Sun in London!"  Dr. Allard stated that Luka Magnotta is "embarrassed and ashamed" at having sent the email and that he "sent it because he wanted to scare Alex West."    Adding, "It was bad judgement."  Magnotta has also admitted to being involved in the kitten killings videos, although he claims he was made to do so!