Sex, Lies and Videotape...Will the Jury get to know the full story?

In what might well transpire to be a defining moment in the Magnotta Trial, Dr. Joel Watts, forensic psychiatrist appearing for the Defence, was asked under cross-examination by the Crown about an extract from his report (P.92) regarding online postings promoting the 'One Lunatic One Ice Pick' video prior to the murder of Jun Lin: "I asked Mr. Magnotta about online postings that appeared on the Internet in the weeks prior to the killing, allegedly promoting the video of Mr. Lin’s death."  Dr. Watts told the Court: “I cannot recall where I got that information, but I thought it important enough to ask Mr. Magnotta about it.”


In response, Magnotta told Dr. Watts: "I have been trying to make sense of it, I hope it was not me, I don’t remember doing it, it feels weird.”

In his report Dr. Watts then asked if Magnotta had chosen the title 'One Lunatic, One Ice Pick', Magnotta replied: “I don’t remember doing it, I don’t know what the hell is wrong with me. Maybe I’ve been watching too many movies, maybe it was to scare people, I don’t know if I even did it.”

Conveniently, meticulous 'forensic' psychiatrist Dr. Watts omitted to mention this information in his lengthy testimony to the Court, but after his 124-page report was filed into evidence the Crown seized upon this omission in an attempt to unravel the Defences case about the murder not being premeditated. 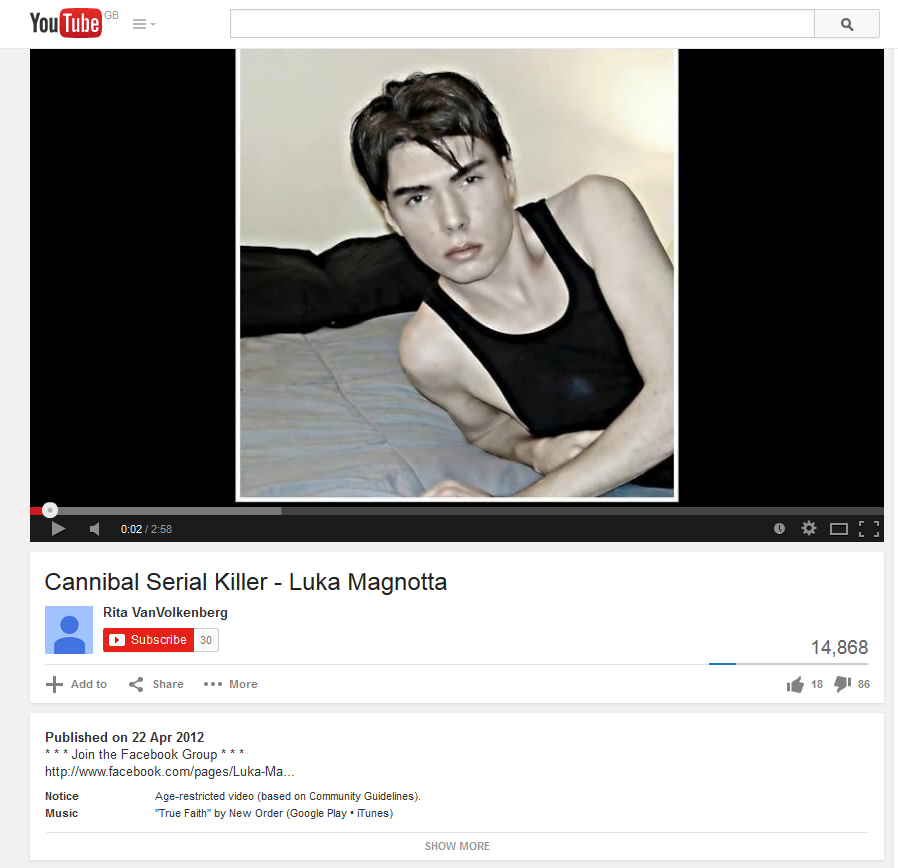 15th May 2012 – vimeo.com – Angela Downs – A short “promotional” video is uploaded depicting a person in a purple hoodie with fist clench holding an ice pick, referencing the 1 Lunatic 1 Ice Pick video and asking if anyone knows the “guy” in the video.

15th May 2012 – neoseeker.com – briankinney556 – Another forum posting claiming there is a video circulating on TOR called 1 Lunatic 1 Ice Pick. The sockpuppet used in this posting could be a reference to Moors Murder victim, Brian McKinney, or the character Brian Kinney in the US version of Queer as Folk.  This post appears to have been removed.

16th May 2012 – PsychForums – anonymousgirl4 – Two forum postings to the Anti-Social Personality Disorder board mentioning the 1 Lunatic 1 Ice Pick video and speculating about the mental health condition of a person involved in snuff, cannibalism and necrophilia.


It remains somewhat perplexing exactly why the Crown did not introduce these online postings into evidence when presenting it's case, but I rather suspect Crown prosecutor, Louis Bouthillier, took a calculated risk to withhold these postings from Crown Disclosure (i.e. from the Defence) with the intention of seeking an opportunity to introduce evidence about the online postings at some point after the Defence had set out their case, or possibly as rebuttal evidence.

Dr. Watts' omission gave the Crown such an opportunity, but alas for Mr. Bouthillier the gambit proved futile, as when he attempted to question Dr. Watts about the online postings, Magnotta's Defence attorney, Luc Leclair, objected and the Jury were sent out for an hour while Counsel made legal argument about the matter.

It would be ridiculous for me to attempt to speculate about what went on during legal discussions while the Court was in closed session, but the simple fact is that this was the first and last the Jury heard about the online postings.

The Jury has never seen, or been shown, evidence about these online postings and, therefore, they cannot take these postings into consideration when considering whether the murder of Jun Lin was premeditated.

The answer to that question I posed in the title of this article, is...a resounding NO!!


N.B. I have posted an updated version of this article in my report 'A final analysis of the Magnotta Case', but I have decided to keep this version because people have taken the time to comment.
at 18:00