I call Romeo Salta for the defence, Your Honour

New York lawyer Romeo Salta has apparently been told by LM's lead defence counsel Luc Leclair not to divulge further information on his dealings with LM during 2011, a move seen as a preparation for Mr. Salta being called by the defence to give testimony about LM's claims of abuse during his "relationship" with the mysterious 'Manny' character (the original story and PDF of LM's emails to Romeo Salta is linked in the Timeline).

Now, hands up who didn't see that one coming? lol 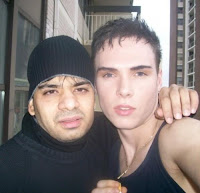 Possibly in a related matter:
Does anybody know who this guy is pictured with Luka Magnotta?

There is no camera EXIF data to give an idea of when this picture was taken, or, for that matter, even where it was taken.
at 22:54